What’s your perspective on architecture?
There’s the hard and soft architecture. I think about it as buildings with program and without program, for example, it’s really popular these days to make a bar inside of a warehouse or make an office inside of an old church, it means that we’re misusing the purpose of design; the architecture is designed and used for something else. The initial building is the hard architecture; it’s just an instrument and how we misuse it, becomes the soft architecture, which is the use of the instrument. Basically, the built out is the artifact that describes the city, but the energy and the culture of it, it’s performed by the soft architecture.

Why the name Bureau Spectacular?
I had a difficult time choosing a name for the office back in 2008 when we started, then I met this fellow, his name is Michael Speaks, he’s currently the Dean of Syracuse University, he introduce me to a book titled “On Bullshit”, written by Harry G. Frankfurt, in the book, Frankfurt talks about the differences between lying and bullshitting, lying requires truth, it needs the truth to cover it up, bullshit does not require truth, you’ll say something and may or not be true, but then, maybe later becomes true, so “BS”, “Bureau Spectacular”.

How can you describe your work and how you approach it?
It’s a mix of hardcore and nonchalant. It’s like a Quentin Tarantino film, his movies have the perfect combination; you can witness a chevalier attitude towards violence and they talk almost in a philosophical language, but then, the characters are wearing gym shorts and use tacky coffee mugs and bathrobes. It’s a balance between being serious and super focused, because only with that kind of attitude you can make something immaculate, beautiful and thoughtful, but also being not boring, they’re opposite feelings, but that’s how I describe it and approach it.

Can you recount your time in Taliesin and Atelier Van Lieshout?
How was the experience and what moved you to make the decision to do it?When I was younger, I was very impressed by Frank Lloyd Wright, we probably all did at one point and maybe we all grow out of it, for me, growing out of it required going to Taliesin, I really wanted to understand it. Recounting it, I was in the Arizona desert, if I had to go to the bathroom or take a shower, I had to take a ten or fifteen minute walk, I lived in a shelter designed by Joy Charbonneau, it had no water or electricity, there was no entertainment whatsoever, you could only make fire and drink alcohol, it was kind of primitive and fantastic. I also got to meet people who worked and studied directly with Wright, I met quite a number of them, for example, there was a lady named Cornelia Brierly, she worked on the Broadacre City model in the late 20’s, early 30’s, to hear stories from her of the time when Wright was alive and in a very different world from the one that we are now, it’s like a time travel. One of the biggest takeaways for me about Wright’s work is the management of sizes, there’s an idea of expansion and contraction, when you go from big to small, that characteristic continues with me until now. Now, Atelier Van Lieshout was immediately after Taliesin, during my time in the desert I decided to apply. Joep Van Lieshout [Founder of Atelier Van Lieshout] is a Dutch artist, in 2001 he proclaimed the independence from the Netherlands, there’s a piece of land declared a little country which he called the AVL-Ville, his intention was to make a free state and a commune for artists; at that time of my life I had super left tendencies, I said: “Yeah, let’s join the commune”, I packed up my things and I went. At that moment I had nothing, I had just one suitcase; I think I lost about 15 kilograms in that year, it was a tough time, but a really liberating one, because suddenly all of my personal values about how to be a proper citizen and how to live normally changed, I realized that I don’t need a lot of things, that year taught me the priorities in life.

What’s your outlook on urbanism, architecture and interiorism?
How doyou manage to dissolve the line between them?Last night, I was flying from Taipei and when we were landing, I saw tiny little boxes; the attractive part is when they don’t align well with each other, meaning that the streets are not parallel with the gaps, therefore, like I said previously, they go from big to small, you can perceive an outside and inside life. If we go back to the Nolli Plan of Rome [Planned by Giambattista Nolli], where the occupiable and the not occupiable are rendered in black and white, we’re able to perceive that the white fragments contain the public life, the civic life and the black pieces accommodate the private life, the personal time. I think this is the distinction when you talk about urbanism, architecture orinterior, it’s about being civic or being personal, which is not to say that you’re not able to reenact an urban experience in the interior, because it’s possible, for example, we can manage to introduce tight or soft turns of an urban environment to the inside of a house and suddenly it’s about the qualities of urbanism, rather than the identities of it. In your manifesto “Citizen Of No Place”, you create surreal sceneries developed like comic strips.

What’s the relation between cartoons and architecture?
Cartoons are great in many ways. Number one, when you read a newspaper, especially in the political comic section, there are this cartoon characters of famous politicians and the accuracy of the drawings are not really there, but whenever we see a character of Obama, with big ears or Gorbachev with his birthmark, we know who they are and it’s amazing, because it becomes a representational technique to transform and exaggerate reality, as a designer, I find that great, because we can talk about typology. Aspect number two, when in storytelling mode, you’re able to zoom in scale and zoom in time, how you cut between the frames is almost as directing a movie, if we’re talking about program and the daily life of people and how they go into it as a filmic or cinematic experience, it has a direct relationship with storyboards and architecture. Third and final point would be the composition of the comic book, which you can read plan-wise or section-wise, is it a plan or a section? Also, bubbles become episodes or programs. When I think about the Toledo Glass Museum or the Rolex Learning Center or the Moriyama House, all designed by SANAA, to me, those are comic books. 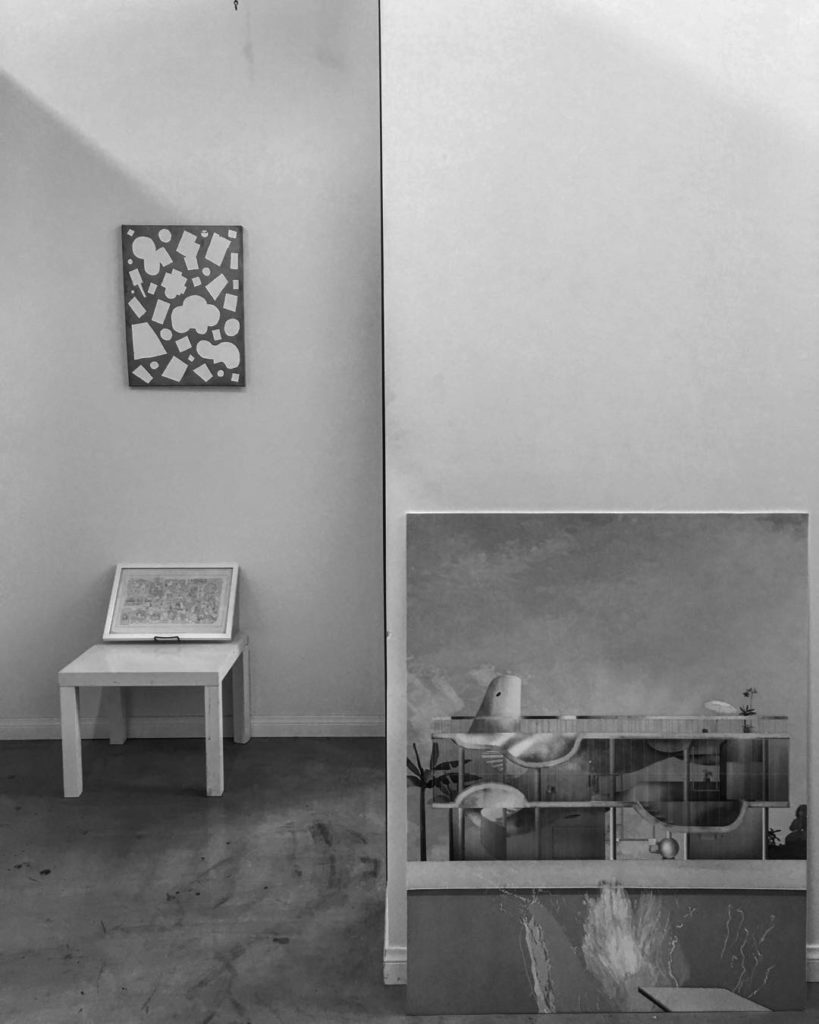 In which stage of your creative process do you focus the most?
I can tell you when I focus the least, that’s when the project is finished, then I stop thinking about it, but before that moment comes, I’m always worried. Sometimes the building it’s built and long after it’s built, there’s still this personal connection with the architect, but I think that’s unhealthy, I think it’s healthy to say: “It’s finished, next project”, because when it’s built, it’s in the civic world, it’s on the public domain, it’s gone. What’s more interesting for you? The storytelling behind a project or the final product of it?They’re both interesting, the final product it’s important because that’s all you remember, in fact, probably all you’ll remember is a photograph of it and there will be months of blood, sweat and tears behind it and it doesn’t really matter, you don’t know the person, all you know is the object. With that said, I find process really fun to listen, fun to understand and fun to do.

As a devotee of both, I capture an essence of Archigram and Superstudio in your work. Have they influenced you somehow?
Absolutely, very much, when I was in school, that was the kind of stuff I was paying attention to, I would also pay attention to John Hejduk, Bernard Tschumi and Daniel Libeskind. Superstudio’s “Continuous Monument”, was really important to me, there’s this segments of storyboards that I loved as a person who likes comic books and movies. When I saw something like Superstudio’s work telling me that what they did was ok to do in architecture, I felt better, I thought: “The vocation of building buildings it’s not all that I have to worry about”. In recent times, we had PLOT and servo, PLOT [Founded by Bjarke Ingels and Julien De Smedt], changed the world with the kind of work they weredoing at the time. I’m attracted to the idea of super groups, it’s interesting how they get together, do something ridiculous and usually, just dissolve.

What’s your opinion on architecture nowadays?
It’s still happening and it’s still interesting. My good friend Andrew Kovacs, he taught me something really important, he says: “You don’t have to like something to learn from it”. [Quote made famous by Robert Venturi]. If you ask me: “Do you like everything?” I’ll say: “No”, but it’s important to appreciate the cup of tea that you don’t like in order to understand why you don’t like it, the people who are behind the wheel of architecture that you don’t like are also smart people. Right now is a time where there are so many approaches for architecture and it’s really beautiful, there are so many centers of gravity, it’s kind of amazing.

What’s your favorite book of all time and which one are you reading right now?
I do audio books these days, the one that I’m reading/listening right now, it’s called “The Origin And Evolution Of Earth: From The Big Bang To The Future Of Human Existence” by Robert M. Hazen, it’s super dense, it talks about chemistry, carbon composites, the first minerals on Earth, biology and how everything’s related, it’s actually interesting, it has nothing to do with architecture, but that’s what I’m into right now. In terms of all time, It could be “Discipline And Punish” by Michel Foucault, but it’s also really dense, maybe, “Dragon Ball Z”…actually, you know what? I take that back, it’s “Vagabond” by Takehiko Inoue, “Vagabond”it’s a manga, I love it, it’s still an ongoing series, it’s super amazing, my final answer it’s “Vagabond”.